A little slideshow from Alaska. Enjoy!!

I’m not sure what I was expecting from the Mayor’s Midnight Sun Marathon. I can tell you that what I expected wasn’t quite what I got from it. I had spent the week before the race bouncing all over the place. I was ready, and I wasn’t afraid of it (the nerves didn’t kick in until the night before the race). You couldn’t ask for a more beautiful setting for a marathon than Alaska! It’s beautiful scenery. The day got off to an early start at 5:30, so that the full marathon team could meet-up for pictures, and head to the shuttle (the full and 1/2 started at different locations and times). 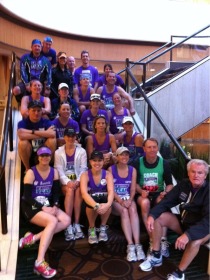 The week before Jeff, Diane, and I had planned out the race. We decided to break it up into a bunch of 5ks that would be easy and manageable. The first several miles were pretty awesome! The whole team started together since there weren’t any corrals. The first mile was pretty slow, and comfortable. We had started towards the back, which was great because there were so many people trying to get onto the small paved trail that it was hard to start too fast. The problem was trying to get around people. I stayed with several teammates until my first planned pick-up. Jeff told me to take the race like one of our long runs. A nice easy pace in heart rate zone 2, and every 20 minute surge for 3 minutes in heart rate zone 3. I found it really easy, and almost what my body wanted to do naturally. I chatted easily with people around me, and relaxed into a really nice rhythm.

We had been running along the highway at this point towards the mountains on a little paved trail that went along the side. People would honk and cheer us on as they drove by, which was fun. It was the first time I didn’t mind someone honking at me while I was running! Eventually we made our way up onto an overpass and onto streets. It was another nice section of the race, somewhat shaded with rolling hills (more down than up). I kept playing leap-frog with Carrol & Barb for a bit before they went on ahead. I didn’t mind being by myself. I had trained that way. I was just enjoying the scenery, and the fabulous weather. It was 48 when we started, a far cry from what we had been training in at home.

Mile 7 is where we turn onto the tank trail. Up to this point I feel awesome. Running has been very smooth, almost effortless. I loved how I was feeling. Turning onto the trail I breathed a small sigh of relief. It wasn’t as bad as I had feared. There was a lot of loose rock, but if you got into the ruts from the tanks it was pretty smooth, and fairly level. Yes, you had to go into the rubble to pass people since everyone was trying to do the same thing, but it was manageable. I took my first gel, and started out on the long 8 miles of trail ahead of me. 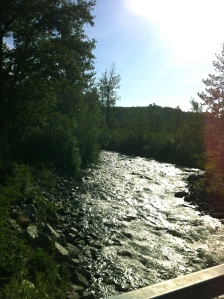 first waterstop on the trail (and yes, the sun was that bright, all day long!)

I knew I was still running strong. I wasn’t having any problems with the rocks. I focused on my form, and reminded myself that every step got me closer to the dirt trail, and then back to pavement. Since the waterstops were spread out to 3 miles on the trail it made keeping track of water & gels a bit more challenging.

There isn’t too much to say about the tank trail. I couldn’t look at the scenery a lot because I was mostly looking right in front of me to see what I was stepping on. I kept an eye on my heart rate, and made sure I wasn’t going too fast. I ditched the surges because the footing was tricky. I figured I could always pick them back up after I got off the trail. Around mile 12 on the steepest hill I’ve ever seen I came across Coach Joe. He was glad to see I was smiling. I told him I was feeling really good, which I was, and took off again after letting him know who was behind me.

I was being chased by a “moose” on the trail

Here’s where the trail finally started to punish me. After the halfway mark the gravel turned to fist size rocks, and the ruts from the tanks disappeared. There was no choice but to run on the rocks, and my legs said they were over it. So, I stopped and walked a bit at a time. We were getting close to the end of the tank trail, so I started counting off the miles. I was more than ready to see the end of it, and so were my legs. I kept myself together, but made one small mistake on the trail that I hoped wouldn’t come back to get me. Instead of taking a gel at an earlier waterstop I had gotten my water bottle refilled. At the time I was okay, but I hadn’t realized how much the trail was going to take out of me. 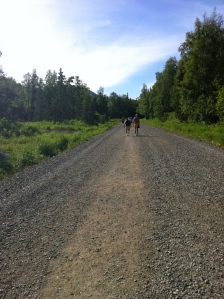 are we done yet?

Finally somewhere around mile 14 the gravel trail is over, and we switch to a fun dirt trail. Honestly, it was one of my favorite parts. We went over bridges, jumped over streams, and ran though meadows. Around this point I stopped looking at my watch. It wasn’t about time, it was about getting to the finish. And then finally we were back on pavement!

The thing that surprised me the most about being back on pavement was how quickly my stride clicked back into place. My ankles were tired from all of the uneven terrain we had been on, but the minute I got back to the pavement it all went away. And then part way through 16 I realized I was in trouble. I needed a gel, and I needed it bad! I got myself to the waterstop at mile 17 after a quick message to Diane to let her know where I was & what was happening. I was a little worried. I got the gel down, and grab a handful of pretzels, and walked. I had to let everything settle. I walked past a friend who passed me an extra gel packet, and then Allison came up behind me! By then I was feeling better, and she said she was run/walking. I immediately joined her. It was exactly what I needed. For the next several miles things went okay. I messaged Diane again to let her know I was okay. I kept me head in the game, and instead of finding a bite me zone I looked for ways to get to the finish. I eventually had to let Allison go on ahead somewhere around mile 22 or so. My right calf & achilies were getting tight, and I couldn’t keep running for the full 8 minute run interval anymore. I did however come across a nice Team in Training participant from Michigan. It seemed every time I could possibly get down on myself I would meet someone to chat with. The two of use were both getting tight. We picked landmarks to run to, and then would take short walk breaks. We discovered quickly that we had to walk through the tunnels in the parks because we would get dizzy from the ribbing in the metal. At mile 24 I found our Georgia head coach, and he helped me stretch my calf, and put some biofreeze on it in the hopes that maybe it would loosen up (unfortunately it didn’t help). Two more team in training coaches checked on me on my way around the lake. They didn’t believe me when I said I was really tight because my form looked so good I was making it look easy. I was also really upbeat because I knew I was getting close. And then came the hill. People had made a lot out of the final hill, and another Team in Training coach came up to me, said hello, and told me he was sticking with me all the way to the top. I mentioned my calf, and he told just to let him know if we needed to walk. The hill actually made everything feel loads better! I ran almost the whole thing without any trouble. All of the hills in Atlanta were paying off! At the top of the hill we said goodbye, and worked my way down the final street. As I made my way to the school were the finish line was waiting for me I found a familiar face running towards me. A friend from twitter and dailymile is a coach for the great Los Angeles chapter of team in training. I had hoped that I would get to see Chris at some point during the race, and there he was. As soon as I saw him we took off. Another TNT participant had been running with us, but decided to pull back in the final turns. I was just letting Chris pull me! It wasn’t too fast at all, it was actually really comfortable, almost easy. He got a bit ahead of me to snap a quick photo, and then I took off. The final gear that had been waiting fired, and I took off in a sprint for the finish line. It felt awesome! I had made it. It wasn’t the time I had wanted (5:25:16) or even trained for, but I was done, and I had kept myself together instead of imploding when things got tough. I had been smart, listening to body, and running the race that I had that day. Looking back I wish somethings had gone differently, but overall I’m happy. Most of all I’m super motivated to start training for Savannah! 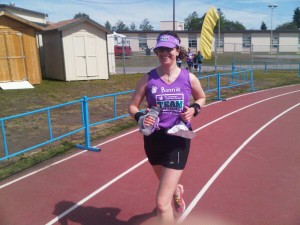 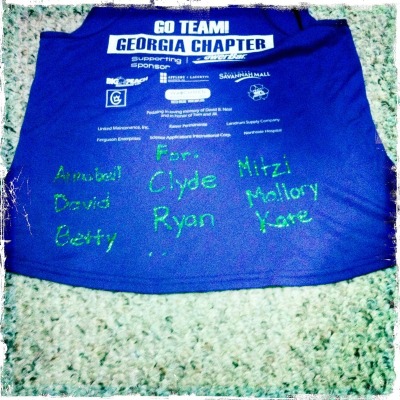 plus a fun video