10 months ago my dentist decided he needed to figure out what was going on with my teeth. Someone my age should not be having the problems my gums and teeth were having he said. convinced it was because I am a violinist he started casting molds and figuring out my jaw angles so that he could figure out what was going on. So I was photographed, pasted, and had impressions done none stop for an hour. At the end he was still convinced it was the violin and/or I was grinding my teeth despite the fact that I showed no symptoms. He even told he how he thought I should play the violin (that didn’t go over so well). A month later I was back in his office with my mom to find out the results. All I got was a whole bunch of “I don’t know,” and was refered on to our family orthodontist.

Now 3 months in to this journey I was still getting a whole bunch of “I don’t know.” More tests, scans, and molds were needed to find out what was going on. Everyone was still convinced that it was because of my violin playing and/or grinding my teeth. At this point I was starting to get annoyed, but then an important question got asked that no one had thought of before. Had I ever fallen on my chin or jaw? Actually, I had. Back in 2008 while I was training for my first marathon I tripped and landed on my chin. All of the sudden things changed. Our orthodontist  started asking questions about when we had started noticing the changes. Funny you should ask. Everything started happening after the fall. He couldn’t be sure without looking at the results of scans and molds but the orthodontist was now convinced that something was going on with my jaw rather than the violin. And then the small phrase “you might need surgery” popped up. What?! So for 3 months after my scans and test I waited. I want to say I was patient but the idea of surgery kept popping up in my head. What do I do about races? I was I suppose to work if I had surgery? I had all of these gigs booked for the spring what was I suppose to do about those? The little questions kept popping up in my head, and driving me nuts for months. Finally in January I got the news. It was indeed my jaw causing all of my problems. One side was a 1cm higher than the other. The good news, no surgery! They couldn’t actually operate in the area where my issue is located. Fortunately I took my mom with me because I’m not sure how much of what happened next I remember. I didn’t need surgery. I had a bunch of papers with options and prices (fortunately my parents are helping to cover the cost of everything) to look though. Everything could be solved with braces, but I was warned it wasn’t going to be a picnic. I also had to go have my gums evaluated before anything else could happen to make sure they could stand up to everything.

So, by February I was at the periodontitis. A nice man who listened to what I had been going through and then took a look at everything. He would call me with the results. I waited. Two weeks turned into 4 weeks, and then 6 weeks and still no word. I called and asked why I hadn’t heard anything. Oh, they were trying to get all 3 dentist together to consult, you know how that is like, they said. I called the orthodontist and told them what my decision was and explained what the hold up was. They would call and find out what was going on. I felt better.

nearly 8 weeks after my appointment I got an e-mail telling me they were working on getting all of the dentist together to talk and apologizing for the wait. I had a few choice words for that e-mail knowing which of the 3 dentist was holding everything up. And finally I got a call. I needed gum grafts before anything could happen. When did I want to schedule. Um, well you kind of missed a big window of opportunity when I had a week off. Since I couldn’t play, or run for a few days after the procedure I needed to look at my calendar and figure out when I would possibly get in. Annoyed? Yes, I was annoyed. I wanted this over with. I couldn’t believe after 10 months of scans and tests I was no where. The only week in April I could find that worked was the same week as my next race. My annoyance level doubled at that point. Maybe if I just didn’t tell them that I would run a couple of days after it would mater. The assistant assured me that nothing would be damaged it I ran I but I might be a little sore.

So, tomorrow morning at 7:30am I get to go have some gum tissue taken from the top of my mouth and relocated to my front lower teeth. I’ve rearranged everything to get this taken care of so that I can finally get the braces put on that I need to fix my jaw and teeth so that I don’t have any other gum issues. Oh, and I may still run my race Saturday, but shh. That’s our little secret.

This week didn’t really go the way I had planned. Monday night I had to call and find out if my standby group had to report for jury duty on Tuesday. Of course we had to go. It hasn’t ever been a bad experience. I had a book all loaded on my nook that I had been trying to read for awhile. Not the best thing I had ever read by the author, but it got me through 5 hours of jury duty. Even with the weird guy turning around and staring at me it wasn’t a bad morning.

The rest of the week was going well till Thursday morning. I was just driving south down Northside Dr and out of now where a tree limb fell on my windshield while I was going 40mph. It was the loudest thing I’ve ever heard! 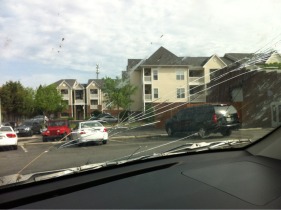 It completely distroyed the windshield. Honestly I don’t really know how I kept going. So Thursday afternoon was spent on the phone with the insurance company and glass companies to see who could come out the earliest to repair the window. Fortunately I found a wonderful company who could fit me in Friday morning (highly recommend the Glass Doctor in Norcross. Great service!). So now I have this pretty windshield: 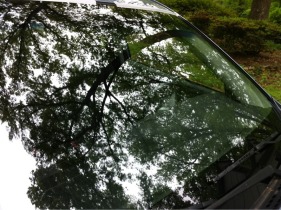 So much better! Thank goodness I still had a little bit of my refund left. Over two weeks I’ve spent over $1100 taking care of things with the car. Hopefully it’s done for awhile because next week I have to start fixing me. I get to have gum grafts done next Thursday. This is slightly problematic because of 15k I’m signed up for next weekend. So I’m planning out soft foods to eat for awhile. Fortunately I have a recipe for dairy free chocolate pudding from one of my favorite restaurants. Pudding is good!