Last week I was watching TV and scrolling through my twitter feed when I came across something interesting. There was a mention of getting an audition ready for the twtrsymphony. Hmm, what in the world is the twtrsymphony? After a little poking around I got a good idea. The twtrsymphony is a social media experiment with the idea of how a symphony is put together. Instead of all of the musicians being in one space together the twtrsymphony wanted to see about putting together a group of musicians that were on twitter. By combining individual recordings done by musicians the composer would then sync them all together in one massive recording to make the symphony. It sounded kind of cool. After a short conversation I had a message from the composer in residence, did I want to audition?

I have been searching for an audition to do for months. Ever since things finally started to click back in the fall. The small problem is that most orchestras are still keeping open positions unfilled to save money. The music industry has taken a hard hit, and while things are slowly getting better auditions are still few and far between. So, did I want to audition? Sure, I’ll give it a try. Usually I get audition music up to a month in advance if not more. This time I had less than a week. Okay, I can do this! I think for once it actually helped to have less time. So, I practiced the same 140 notes over and over again (the idea is based on twitter’s 140 character limit). I recorded it, and listened objectively to where I needed to make adjustments. How was the sound quality, the dynamics, the rhythm, and the tempo? Finally last Sunday I was ready to start working on my “official” audition recording. In order to make sure that everyone was working with the same tempo the composer provided everyone with recordings that also included a metronome click track. It meant figuring out how to wear headphones while recording. I loved it! I had no idea how cool it would be have a click track in my ear while playing. Yes, it meant hearing intonation stuff was a little tricky, but the trade-off was getting all of the tempos, time changes, and rhythm right. I kind of wish I could have a click track all the time now 🙂

Auditions closed earlier this week for clarinets, all string instruments, harp, and piano. Out of 100 auditions 53 musicians from all over the country and world were offered positions with the group. This morning I found out that I am one of those 53 musicians! I’m looking forward to being a part of the orchestra and spending more time recording. It’s opened my eyes and ears to things in my own playing. Things that were just starting to make sense, and will make me an even better musician. Even better I have a successful audition under my belt. I want to do more! It makes me realize that I do belong in this industry, and hopeful that one day my dream job may just become a reality.

I finished my violin lesson a week ago to “Oh, goody, goody you’re getting betttteeeer!” And yes, my teacher had a devilish smile on his face while tapping his fingers together. I need to back up a bit though.

It was the summer of 1996. The Atlanta Olympics were over and I was finishing up my final weekend in Valdosta, GA at the Governor’s honors program. I had just gotten my excerpts for my final year of auditioning for the Atlanta Youth Symphony and was going to spend the afternoon practicing them to have them ready for my first lesson when I got home. About 30 minutes in I felt a huge snap and release in my left forearm. I don’t remember exactly what I thought, but I’m pretty sure it was something like “that can’t be good!” I practiced a few more minutes before putting the violin down before the tears started. I saw our orchestra director for quartet rehearsal and he promised to get a bandage so I could wrap my wrist until I could get at looked at once I got home the next week. Some how I played four concerts in three days on what turned out to be a severely strained tendon that took four months of hand therapy before I was pain-free again.

Somehow I managed to get myself ready of all of my college auditions during that because it was my senior year in high school. Like most graduating seniors it never occurred to me that I wouldn’t be good enough to get into the school I wanted. Well, getting into the general university wasn’t the hard part. The hard part was the school of music. What I didn’t know then was how much my technique had played a role in my injury or the fact that my teacher was not teaching me things I should be learning, or even the right way to play the violin. She was turning me into a mini version of herself a fact that caused my current teacher to gasp since he had once been her stand partner. I did in fact manage to get into a school of music, but I don’t think anyone really wanted to take the time to fix me. I needed a lot of fixing! If only I had known then what I know now about playing the violin. I did in fact meet a teacher during this time that made a huge impact on me as a violinist. My mom found a teacher that I could take lessons with during the summers while I was home. A teacher that listened to what had happened with my injury, and what was going on at school. I made more progress with her in three months of lessons at home then I did all year at school a fact that was not lost of my professor. In fact he passed me off to another professor so she could deal with me. Things had gotten so rough between us that by the end of my sophomore year I thought about quitting. He couldn’t understand why I couldn’t just fix things and I struggled to try to figure out what he was talking about. I graduated from school and moved home to figure out what to do with myself and kept working with Shawn. Between those lessons and starting teacher training I learned how to play the violin all over.

My journey as a violinist is a long, long story filled with lots of bumps along the way. I have learned and relearn to play the violin more times than I care to remember, but about eight months ago something started to click. Oddly it was after my first trip to the chiropractor because of my hips. I was having trouble running, and because of some form issues my coach recommended a trip to the chiropractor. I was out of alignment. It was an eye-opening experience because while he adjusted my hips he also took care of my shoulders, something I wasn’t expecting. The first time I played my violin after that was amazing. I could move! And I could actually feel how tight I had been getting while I was playing something I hadn’t realized before. I had made a lot of progress over the past couple of years, but I have improved leaps and bounds over the past eight months. It was as if everything people had taught me just clicked. I had no idea how off I had been. Getting my body to hold the alignment was a bigger battle. Fortunately my running coach already had me doing strength workouts that helped a lot. Eventually things got a lot better. Playing in orchestra was a lot easier. I could get through two 3-hour rehearsal without being tired or sore. My playing in general was getting better, and I was slowly starting to get more confident.

I’ve never really thought of myself as a strong person. Close friends will probably read this and think that’s silly to say, but it’s true. I would also second guess my potential as a violinist, and even occasionally think I was a failure. Some of that had to do with the way past teachers had talked to me. There have been many days where I have beat myself up and ended up in tears. Since January I have felt much stronger, not just physically but mentally as well. Why the sudden change? I recovered from a running injury and almost PRed my first race back without trying. That lead to a string of really strong, and much faster races. Then I started doing Pilates with my friend Laura who getting her teacher certification. I can’t even begin to say how much I love Pilates! I’ve learned so much about how the body works, and well the machines are pretty darn cool. Thursday morning Pilates is one of my favorite times of the week. Not only do I feel strong while I run, but I feel strong while I’m playing the violin. It’s easier to keep my posture and hold the violin the way I’m suppose to which frees up the tension everywhere else. I actually believe my teacher when he says I can play anything he puts in front of me now. There have been a few times where I wouldn’t be surprised if he started doing cartwheels across his house! I finally feel comfortable playing with colleagues that I’ve looked up to for years. I can hold my own and relax because I know the technique I need is there. I can worry more about creating music and trying to figure out crazy bowings. I can play the violin and play it well!

Strong is good! I like getting better, and I’m excited to see where it takes me! 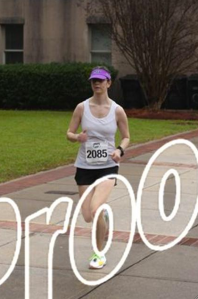