Last November I did something I had been thinking about, but never done. I put my name in for the New York City Marathon lottery. See, there are so many people who want to run that all people interested apply to be apart of a lottery for entries. I’ve wanted to run the race for a couple of years, but never plucked up the nerve to apply. This year a friend said I just had to sign up. I’m a marathon runner, I had to run NYCM. So, why was I nervous? It might have something to do with already being signed up for another marathon the same weekend. Go ahead, she said, just put your name in. No one gets in the first time…

So, I paid my $11 and registered all the while hoping I wouldn’t get in, so I could do the race I was already signed up for. Well lottery day arrived yesterday. You know that sinking feeling you get when you want things to go one way, but just know the opposite is going to happen. Well noon came, and the lottery started. There were feeds to watch the live lottery selections, which I didn’t have time to watch. But then around 1:15 the news started to come in. Someone had seen my name scroll across, then another person noticed. I had to check, but the site was down. Finally I got my hands on a link to check my status, and sure enough there it was. I had been selected to participate in the 2011 NYC marathon.

So now it come down to what to do. My training plan for the year has been designed around Savannah. It’s the race I’ve been looking forward to the most, and where all of my friends are going to be. Plus I’m signed up to run it with team in training as my local event (they cover 2 events for me as a GTS coordinator). One friend pointed out that NYCM is going to be super expensive if I defer, but no mater what race I choose I lose money since i’ve already registered for Savannah. Basically it came down to which race I really wanted to run this year, and my choice keeps coming up as Savannah. Financially it works out better to do NYCM next year. So, today I need to check out my deferment options. The NYCM website has been surprisingly out of date, and the login system was down all day yesterday, so hopefully I can find what I need.

I’m super excited about having the chance to run NYCM, and I never expected to get in on my first try.

One of my favorite race memories is from finishing the 2009 Nike Women’s Marathon. Instead of the traditional race medal I got a little blue box from Tiffany’s with a beautiful necklace inside to mark the race. I love it, and wear it all the time, something that you can’t really do with traditional race medals. When I finished the Georgia Marathon back in March I knew I wanted to do something to mark not only the occasion, but also the accomplishment of having a good race, and not hitting the wall. Turns out I know the talented, and wonderful Erica Sara through twitter and DailyMile who happens to design, and create jewelry.

Erica, and spent some time chatting, and working through what we would end up creating. I knew I wanted to keep wearing my Tiffany’s necklace, and since I don’t wear a lot of jewelry because of playing the violin for most of the day I also knew that I wanted something that would go with the necklace I already had. We ended up collaborating on what you see above. A simple rectangle made of silver inscribed with “dream, believe” with a stone of hematite embedded (it means “support for hopes, dreams, wishes, and desires. Encourages you to “reach for the sun.” Reminds you that the only limitations that exist are the ones you place on yourself)

I really can’t tell you how much I love it! 😀 It works perfectly with the existing necklace, and holds it’s on all at the same time. It’s just a little something to remind me of what I have already accomplished, and to keep going towards the things I still want to accomplish. It really is perfect!

My head is so full of pollen I can barely think straight. Top that with an insane week, and I don’t have much. So I thought I would share some things I’m excited about: 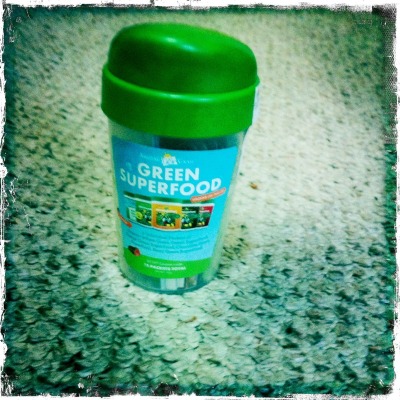 I have been looking for one of these amazing grass smoothie containers forever!! And there it was at Whole Foods. Plus it came with samples of their superfood products. I can’t wait to start making smoothies to take to work, or have post run!

One of my twitter buddies decided she wanted to try making her own sweatybands, and I got to try one of her test bands! LOVE IT! can’t wait for her to add them to her etsy store 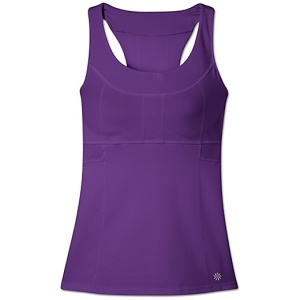 After 4 years I thought it was time to start replacing some of my summer running tops. They um, well they kind of smell. So I ordered these from Athleta. They got here earlier than scheduled & they’re super cute! So excited. I bought all three colors, but the purple is backordered. I wore the white one this morning for some hill repeats & it was fabulous! It fits great, has two huge pockets on the back, and perfectly wicks the sweat away. I never felt sweaty while I was running, which is pretty impressive.

That’s it for now. I’m pretty excited about a little something Erica and I have been chatting about. I can’t wait to share, but in the mean time you should check out her website 🙂