As most of you know, I am training to complete the Chicago Marathon with the Leukemia & Lymphoma Society’s Team in Training program on October 10. In addition to training to complete 26.2 miles I have also committed to raising $2500 that will benefit the Leaukemia & Lymphoma Society’s patient aid and cancer research programs. I am getting closer to my goal, but I still need to raise a little over $500. So, I am asking 50 people to donate $10 between now and August 31, 2010. Together we can do this, and to make it a little more fun each donation of $10 will be entered into a raffle for a $50 iTunes gift card!


$10 alone may not seem like a lot, but together the power of our money can save many lives!!

I have this sum what silly rule that I made up after my second marathon. Never, I repeat, never sign up for another marathon until I finish running the one I’m currently training for. Um, yeah so my 2011 race schedule has 2 marathons on it already. While it’s a bit of a silly rule put in place because I was just unexcited about marathons for a bit after my 2nd one I have a really good reasoning for what I signed up for!

Normally I might be freaking out about this. Two more marathons? I’m strangely at peace with all of this. First, it gives me a chance to take some time to just focus on my running. Yes, I realize that not everyone wants to sign up over a year in advance for a race, but I’m working on planning some goals, and having some firm dates gives me a chance to plan. One of those goals is qualifying for Boston. I’m pretty far off that goal at the moment, and I think some time really focusing on my own training will get me where I want to go. I’m excited to run Chicago in 8 weeks (especially coming off a strong run this morning) and seeing where my training has taken me.

Anyway, that’s where I am at the moment. Plus I want to do some shorter races too 🙂 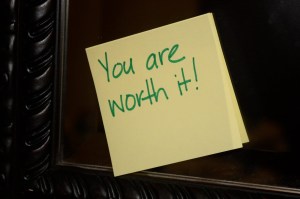 My violin teacher and I had a really good talk at my last lesson. The week before I had gotten very frustrated that things were not as good as I thought they were. I get frustrated pretty easily sometimes and it generally has very little to do with what is going on at the time. It actually goes back many, many years to teachers and people who have convinced me that I am not good enough.

For years I studied with violin teachers who constantly told me that I was no good. I had no business trying to pursue a career in music. Instead of helping me and showing how to fix things they would put me down or tell me that I was going to fail. When I had problems with something, no mater how hard I worked, the voice in my head said I would never get it right because I wasn’t good enough.

I started applying to grad schools, and ended up having some rotten audition experiences. I was nervous, and wanted to make a good impression. On one particularly bad experience I was taken aside to a room, and told that I really had no business applying to that school, and if I so desired I could take some teacher training during the summer if I had to, but I really needed to learn how to play the violin. I spent the rest of the day in tears. I was no good and a failure.

I eventually got into grad school and started working with a violin teacher who believed in me, and saw the potential others didn’t. With his encouragement things started to turn around. I started to believe in myself, and then I walked into one of my required classes. It was never actually offered, so I had to sign up as an independent study. I was given a syllabus and told to do the reading for each week and we would discuss it when we met. Half way through the semester I was being told that I was stupid and was use to having other people do things for me because I couldn’t read the teacher’s mind. See he didn’t actually want me to do the readings he assigned. He wanted to go through the music encyclopedia and create list based on what we were studying and research hundreds of individual pieces (I might also mention at the time I had a 3.95 GPA. No one had ever done anything for me, nor had anyone ever considered me stupid). I always went to the bathroom after our meetings to cry before heading back to work. I felt worthless and no good. (A year ago it came up in a discussion with my mom. She was furious). This same instructor also tried to take away my small scholarship that the music school had given me, but my violin professor fought him and even got me more money. To this day I am incredibly grateful for what he did for me, and for standing up and believing in me.

Things got better for a while after grad school. I had a job teaching private lessons and was getting steady freelance work as a violinist. I was living my dream, and loving it. In the back on my mind I knew I wasn’t good enough. I wanted to get better as a violinist. I knew that there were things that still needed work. So, I started taking lessons with my current teacher. Around the same time some things started happening at work. Students started leaving. What was wrong with me? It was implied that I must be the problem. And then the recession. There was a huge drop, not only in my studio, but the entire school. I was blamed for all of it. It was my fault that things were getting bad, and then totally unreasonable things were said to be the matter with me. I felt worthless, and no good. I struggled when I played assuming whenever I couldn’t get something right it was because I was no good. I never did enough to help my parents, and what I did was not good enough. We went on a family vacation to Italy (after another disastrous audition), and I was in charge of the map. Was I sure I really knew where I was going? I never said the right thing. Everything I seemed to do was wrong, which didn’t help the fact that I was miserable from the audition.

Fast forward to last week’s violin lesson. My frustration had nothing to do with what my teacher was trying to help me with, and everything to do with the sense of worthlessness that I couldn’t shake. I couldn’t do what he was asking because I was no good. I know that it isn’t true, but so often I am told that there is something wrong me. I only hear the negative. I crave positive feedback and encouragement and feel flat when it doesn’t come. And then one day last summer I came across a site called Operation Beautiful. The title of Caitlin’s book says it all “Operation Beautiful: Transforming the Way you See Yourself One Post-it at a Time”

I’ve only just started reading the book, but it is incredibly inspiring to read about women how have battled their demons and won just by changing the way they think from negative to positive. It is time to stop hearing the negative and to reprogram the way I think to the positive. My violin teacher started really. He told me that I have a gift with hearing intonation. “What good is the gift you don’t use it? 75% of the musicians out there would kill to have this gift. You are the only one who stands in the way of your potential.” It ends today!