I hit me this morning as I was doing my post run strength training that it’s been exactly a year since I started adding push ups, sit ups, and other such exercises into my regular fitness plan. Recently I rearranged things to go back to some more traditional strengthening exercises, and I immediately noticed a difference, in my violin playing! Yes, I said my violin playing. Not that it isn’t already showing up in my running, but you wouldn’t believe the difference it can make in other walks of life as well. A lesson I realized yesterday as one of my students and I were on the floor of my violin studio doing push ups. She busted out 4 of those bad boys (she’s only 7!! I should also mention that I don’t actually make any student do push ups. She brought it up).

So what’s so great about strength training?

The snow has come to Atlanta!!!! I’ve been as giddy as a school girl since it started, which, while slightly distracting, has been rather helpful. I’m suppose to find pretty colors in my audition excerpts (I am not kidding!). Not the easiest of things since excerpts are a small part of a piece taken out of context. Think of them as a musical quote. Without context it’s hard to find shapes and color (colors serve as a way of adding layers and musical interest. In a way it’s exactly what it sounds like. Different moods in music bring out different colors associations and phrasing). Not only did I start feeling more secure, but I felt like I was at least starting to find some colors and phrases in the music. I actually felt happy after I finished each excerpt, which is a new feeling. I still expect to be picked apart at my lesson on Monday, but I at least feel like I’ve caught up to where I was at the end of last week before leaving for Florida. I like being happy when I play. I have to say it was a pretty awesome feeling, and I sound pretty darn good!

And since I’m so giddy over the snow here are some pictures for you to enjoy! 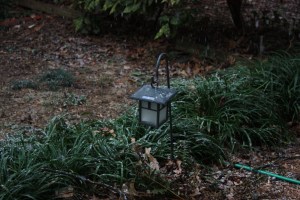 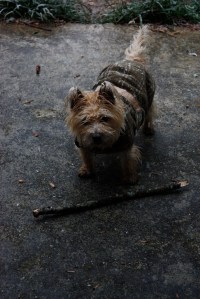 okay, so it’s more of a muddy, slushy mess than anything 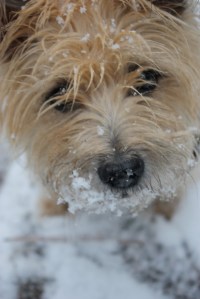 who threw that snowball at me, and where did it go? 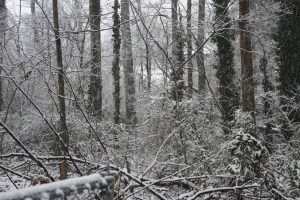 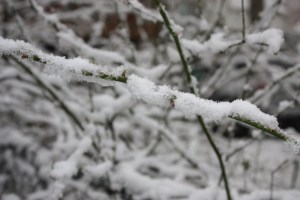 So far I think we have about an inch, and it’s still coming down. Hopefully the Team in Training GTS will still happen Saturday morning so we can all go running in the snow!!! Especially now that I finally feel like I’m kicking whatever I came down with after the race Sunday. Hope you’re having fun in the snow where ever you are!!! (and the Olympics start tonight!!!!!)

I had a really awesome weekend while I was down in Tallahassee for the race. Friday night I got to see one of my best friends from college. As usual we ended up back at her house playing Wii golf with her husband and my sister. I’m a little rusty. The commentators for the game said I was having a “brain boo-boo” at one one point. If only they knew the half of it.

Turns out I had a pretty big “brain boo-boo” when it cam to packing my race gear. Saturday morning I got up to go for a short run and discovered I did not have my running capris for Sunday morning. Hmmm. My TNT staff coordinator is reading this and rolling her eyes. She sent my the packing list from Nike. I printed it out, and was checking things off. I still failed (head hanging in shame). I had plenty of shirts for the race, but not anything to wear on the lower half. Bit of a problem… Enter Sports Authority to save the day!!!! I found an awesome pair of Nike running tights to wear. I was worried I would end up being too warm, but I really, really liked them. Turns out it was a very happy accident. (I should also say that the Sports Authority saw my tweets on twitter about my trip and sent a kind note saying how glad they were that they could help and wished me luck on my race!)

Sunday morning got here fast. I went to bed early Saturday partly because I was tired, and partly because I wasn’t feeling really well. In all honesty running the race may not have been the best decision, but it’s what I decided to do. It was windy. Really windy and cold. The starting temperature was somewhere around 40 with a windchill of 34 (and in case you’re wondering Tallahassee is in Florida…). I debated if I should wear a long sleeve shirt or not. In the ended I went with it. Another smart decision that I would appreciate later in the day. So, dressed, feed, and ready, my sister and I headed out to the start. 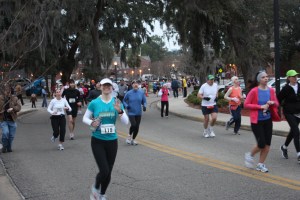 Mile 1.2 I couldn’t feel my fingers or toes

I had a lot of fun for the first 10 miles. I thought about friends, and honored heros from Team in Training. I made mental pictures of the course to help me on the way back to the finish. (2 favorites came back to back. The 2 ponds filled with red and green algae where I pretended the trash was really birds, and the retention pond and industrial buildings. It did look like much, but I really liked it). I meet some fun people along the way. A half marathoner in these cool plaid running shorts who was encouraging everyone after they made the turn around. After the half split I met Don. This was his 70 marathon. I started talking to him because he was wearing a 2008 San Francisco Marathon shirt. Since I had just finished Nike out there in October I thought we would have some things to talk about. It was fun having someone to chat with for while. He also suggested running on the dirt path/trail beside the bike path we were on so it would be easier on the joints. So, thinking about my friend Angela, I ran a couple of miles on the dirt trail, stepping over rocks and sticks, and thinking maybe running on the dirt wasn’t so bad if all trail were like this one. At mile 10 I passed the first guy headed back to the start. I’m pretty sure he won the race because the next group I saw behind him was 2 miles back (and yes he looked like he could be from Kenya).

Things were going pretty well until I hit the turn around, and that’s when it got really windy (I’m thinking at least 15 mph wind gust) and cold. Plus I haven’t run more than 14 miles on a completely flat surface. My hips were not so happy. But I wasn’t going to stop. Don caught back up to me and we chatted some more until I had to stop at mile 17 to get my water bottle refilled. I also started eating a few pretzels. This wasn’t anything new. I’ve done it lots of times on Team in Training runs and been perfectly fine. I don’t know if it was because I wasn’t feeling really great, but my stomach did not like them. I was so hungry during the race (I eat more than I ever had even though I had to force it down at points), but my stomach was incredible unhappy. Mile 18 was probably the hardest of the race. I really wanted a Team in Training coach, but there wasn’t one. I had to be my own coach. So, I thought about what my coaches would say. I thought about my friend Jim and I remembered the orange wristband he had given me (I also wore my Nike finisher necklace). Could I finish? Hell Yeah I could. That little wrist band got me the last 6 miles home. I just put one foot in front of the other. I started getting back to some of the mental pictures I made for myself earlier in the race. I started counting my foot steps. I tried to ignore the fact that my stomach was trying to revolt (the thought of throwing up might make me feel better crossed my mind) especially in the last 2 miles, and then I turned off the trail. The next thing I saw was the very top outline of the football stadium. I was sooo close. within 1.5 miles. Someone said there was no crying in marathoning. I yelled back that that wasn’t true as I was forcing back tears. I was sooooooo close, and it hurt so much. By the time I made it to the track at mile 26 I was bawling. I hadn’t been this emotional in a race in a long time. I had thought a flat race might be a good thing. I had no idea how hard it would prove to be. The weather was brutal. It reminded me of my very first marathon (2008 ING Georgia Marathon). I could see the finish. My sister was there yelling and cheering me on. I was bawling. I had nothing left. For the first time ever I did not sprint to the finish, but I finished!! And I PRed. My garmin Clyde (who happily beeped my mile splits, which actually really helped keep me focused) showed just over 4:50, with the race clock showing 4:57. Early in the race it looked like I might finish somewhere between 4:15 and 4:30. I’m actually really okay with my time. Sure it’s not what I wanted, but something really awesome happened. I didn’t let myself down mentally. I wasn’t always positive, but I didn’t let myself wallow in disappointment as time slipped away or my stomach failed me. I think considering how I felt on the course my time is pretty awesome. 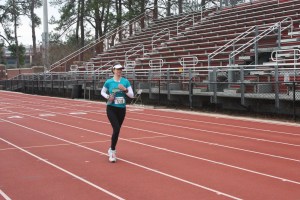 almost there. bawling my eyes out

I’m looking forward to my next race after I recover. Thanks goodness it’s only a half marathon :). I loved the Dailymile Speirs challenge so much that I’m working out a plan to add more strength training into the mix. I don’t have any regrets from the race, I wouldn’t do anything differently. I’m quite proud that I ran 26.2 miles almost completely alone for most of the race (there was no cheering on the course outside of the waterstop volunteers). It makes me feel stronger. I don’t feel like my marathon race times have caught up with my shorter races (although early on my splits we’re awesome!), but that gives me something to keep working towards.